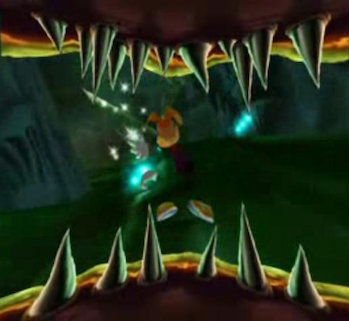 In a Boss Battle against an underwater creature, the creature will usually not reveal itself immediately. Instead, the player must step on a platform, swim around, etc. to trigger the boss "waking up" below. At this point, we will almost invariably see the player through the creature's eyes as it moves through the water before it is fully revealed, as popularized by (or invented by?) the film Jaws.

By no means does the boss have to be a water creature, but that is usually the case.