Staking the Loved One 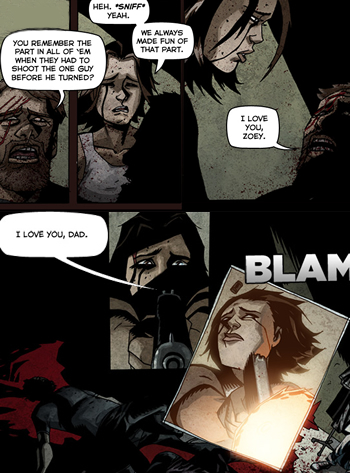 And then he turned out to be The Immune.
"Will it be no joy to think of hereafter in the silence of the night when sleep is not, 'It was my hand that sent her to the stars. It was the hand of him that loved her best, the hand that of all she would herself have chosen, had it been to her to choose?'"
— Van Helsing, Dracula
Advertisement:

One of the occupational hazards of being a Hunter of Monsters involves the death of your friends and family out of vengeance from the monsters you hunt. But sometimes the monsters don't just kill your loved ones. No, sometimes they get extra sadistic and turn them into one of their own. This puts the protagonist in the awful position of having to kill someone they truly loved.

Expect this trope to crop up in Vampire Fiction, almost always when the monsters are Always Chaotic Evil. Usually averted with the Friendly Neighborhood Vampire. This situation can also crop up with other monsters, the most common variations being werewolves and zombies.

Subtrope of Shoot the Dog. Likely to be Dirty Business and to lead to I Let Gwen Stacy Die. See also And Then John Was a Zombie. May be a case of Van Helsing Hate Crimes when the monsters are not Always Chaotic Evil. Related to Transhuman Treachery, as this is what the newly turned are feared to commit. Often the only "good" way What Happened to Mommy? can end up. Frequently a Tear Jerker.

See also I Cannot Self-Terminate, Mercy Kill, and Mercy Kill Arrangement. Sub-Trope of Kill the Ones You Love and Tragic Monster. Compare and contrast Supporting the Monster Loved One, which is this trope's alternative. Not to be confused with stalking the loved one.

Scene from the 1958 film, Horror of Dracula. After preventing Lucy from feeding on her niece and forcing her to flee back to her coffin. Arthur reluctantly gives the go ahead to Helsing to stake Lucy and free her from the undead curse.

Scene from the 1958 film, Horror of Dracula. After preventing Lucy from feeding on her niece and forcing her to flee back to her coffin. Arthur reluctantly gives the go ahead to Helsing to stake Lucy and free her from the undead curse.