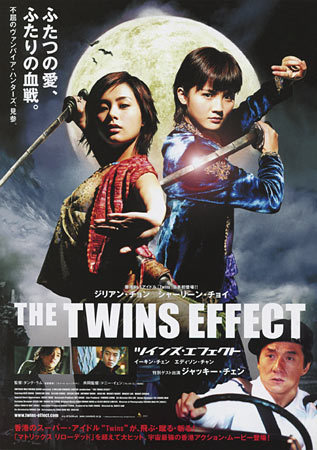 Chan, what are you doing on the bottom right of the cover?
Advertisement:

Reeve (Ekin Cheng) is the best of the best when it comes to slaying the vampires infesting Hong Kong. He's tasked with training Gypsy (Gillian Chung) a novice slayer, who's more interested in fangirling him than concentrating on her training. Reeve's Tsundere sister, Helen (Charlene Choi), attracts the attention of Prince Razaf (Edison Chen), a "sentimental" vampire who refuses to drink blood. Meanwhile, a European vampire, the Duke (Mickey Hardt), is on a quest for the magical stones that will unlock a supreme power....

Features an extended cameo by Jackie Chan, who ended up on the DVD cover of some foreign editions.

Followed up by The Twins Effect 2 in 2004, a fantasy sequel In Name Only marking the debut of Jackie Chan's son.

The Twins Effect provides examples of the following tropes: