Film / Taste the Blood of Dracula 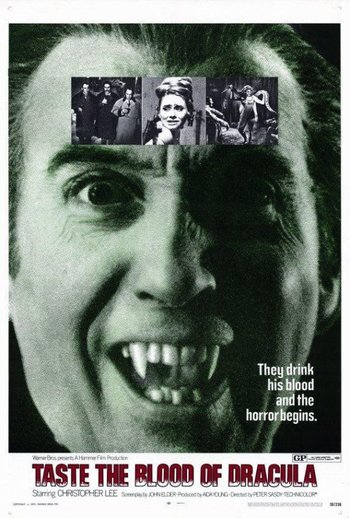 Christopher Lee is about to bite you.
"They have destroyed my servant. They will be destroyed."
— Dracula
Advertisement:

The fifth Dracula film by Hammer, released in 1970 and following Dracula: Has Risen from the Grave. It starred Christopher Lee in his fourth appearance as the Count.

Three gentlemen, Hargood (Geoffrey Keen), Paxton (Peter Sallis) and Secker (John Carson), are bored by their usual hedonistic gatherings involving opium and prostitutes. In a bid to try something new, they agree to attend a ceremony to resurrect Dracula held by young Courtley (Ralph Bates), a known practitioner of black arts. The ceremony is botched at a key moment when the three refuse to taste the blood of Dracula, and Courtley dies by drinking it himself as the gentlemen flee the premises. Dracula's resurrection is however still a success, and he vows to take revenge for the death of his servant.

Followed by Scars of Dracula.