Film / When Dinosaurs Ruled the Earth 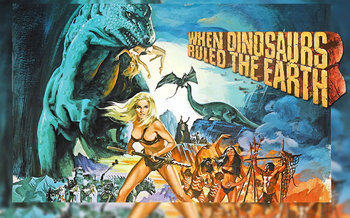 When Dinosaurs Ruled the Earth is a 1970 film, directed by Val Guest and starring Victoria Vetri. A production of Hammer Films, it serves as a spiritual successor to their earlier film One Million Years B.C..

Like its predecessor, it included a great many stop motion dinosaurs and attractive women in fur bikinis. The plot, such as it is, is that in the dawning days of humanity there is a tribe who sacrifice blonde women for better weather. One of these women, Sanna, is able to escape and comes to live among another tribe. There, she falls in love with a tribesman named Tara. But when her new tribe opts to sell her back to her old, Sanna is cast out. Now she and Tara must try to survive in the dinosaur-infested wilderness while being hunted by the tribes.

When Dinosaurs Ruled the Earth was never as popular as its predecessor but is considerably more popular than its successor, Creatures the World Forgot, which abandoned dinosaurs entirely in favour of simple Fanservice.

When Dinosaurs Ruled the Earth contains examples of: