Film / Dracula Has Risen from the Grave 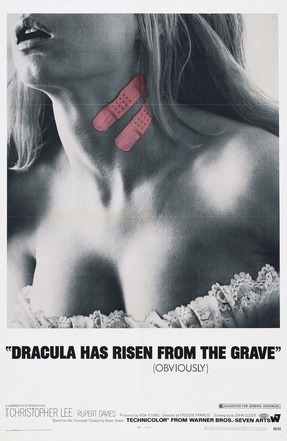 Dracula Has Risen from the Grave is the fourth Dracula film from Hammer Horror, released in 1968 and set immediately after Dracula: Prince of Darkness. The film stars Christopher Lee in his third appearance as Dracula, along with Robert Davies, Veronica Carlson, Barry Andrews, Ewan Hopper and Barbara Ewing.

The film opens with an altar boy about to ring a church bell when suddenly something wet drips on his cheek. Inspecting it, he discovers it is blood. He climbs into the bell tower and to his horror discovers the corpse of a young woman crammed inside the church's bell with two bloody punctured holes in her neck. A year later in 1896, after Dracula has been (supposedly) destroyed Monsignor Ernest Muller (Rupert Davies) comes to the village on a routine visit only to find the altar boy is now a frightened mute and the Priest (Ewan Hooper) has apparently lost his faith. The villagers won't go to Mass at the Catholic church because the shadow of Dracula's castle touches it. To fix this, the Monsignor climbs to the castle to exorcise it.

The terrified Priest follows only partway up the mountain and the Monsignor continues alone. As the Monsignor exorcises the castle, attaching a large metal cross to its gate, a thunderstorm occurs. The Priest flees, stumbles, and is knocked unconscious when his head strikes a rock. The blood from the wound on his head trickles into a frozen stream, then through a crack in the ice onto the lips of the body of Count Dracula – bringing him to life. The Monsignor returns to the village, reassures the villagers, and returns to his home city of Kleinenberg.

Unfortunately, this isn't the end. The newly-revived Dracula is angered at the cross barring entry into his castle and vows revenge. Putting the Priest under his control, Dracula embarks to Kleinenberg for revenge, choosing to target the Monsignor's niece, Maria (Veronica Carlson). It ultimately falls to Maria's Love Interest, a studious young atheist named Paul (Barry Andrews), to save Maria and stop Dracula.

Followed by Taste the Blood of Dracula.

Dracula Has Risen From the Grave has the following tropes: