Film / The Devil Rides Out 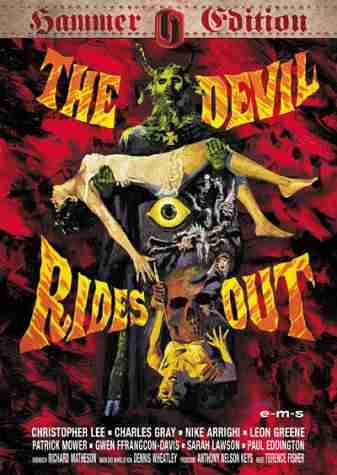 The 1968 Hammer Horror adaptation of the Dennis Wheatley classic, directed by Terence Fisher and starring Christopher Lee. This time he's Playing Against Type as a hero: namely, the Duke of Richleau (or "Duc le Richleau", as the movie calls him). The plot, same as in the novel, centers around Richleau attempting to save a friend from the clutches of an evil Satanist cult, headed by the foreboding Mr. Mocata (Charles Gray). But can Richleau ward off the forces of darkness before it's too late?

Known for being one of the last great Hammer classics — not to mention one of the few times Christopher Lee got to play a good guy for a change — the movie received critical acclaim and was a big hit.

Mocata demonstrates the hypnotic power of his eyes.

Mocata demonstrates the hypnotic power of his eyes.