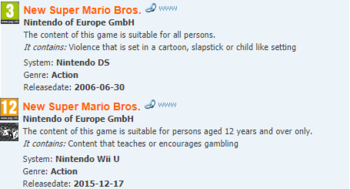 Apparently a minor gambling mini-game is heinous enough to bump the game up to the "Teenagers only" rating.
Mom: But can't we get in trouble for showing our kids that?
Malcolm: No problem. Most eighties films have a PG rating, but that was back when it actually stood for something. Nowadays it stands for "Practically G," so you can plead naïve innocence to your cruelty.
— The Nostalgia Critic's review of Labyrinth
Advertisement:

So the latest entry in your favorite series has just come out. But what's this? "Rated M for Mature?" "Parents Strongly Cautioned?" "Not for children under 17?" What's all this nonsense? The last work in the series, the one before it and all of its predecessors have been perfectly family-friendly. Sure, there might have been a little violence, an odd bit of innuendo that flew over your head 20 years ago that makes you chuckle looking back or a joke or two that pushed the boundaries of what would today be considered good taste, but certainly things haven't changed that much, have they? Has the franchise taken an unexpected turn for the Darker and Edgier while you weren't looking?

You pop in the disc (or crack the cover) and find, surprise surprise, that the series hasn't really changed at all. What's changed is how its content is seen. Something that might have been perfectly innocuous and acceptable 20 or 10 or even five years ago is now regarded as automatic grounds for a rating bump, even if everything else in the series is all rainbows and unicorns. This also happens as ratings systems grow more robust over time, introducing more tiers of ratings and allowing for more precise classification. More egregious cases can be chalked up to overzealous Media Watchdogs and Moral Guardians cracking down on content that was once acceptable (or, at the very least, wasn't considered a cause for concern by more level-headed audiences).

As shown in the page image, this is often an occurrence when old video games are ported, re-released or remastered as a new product years after the original release. With the ESRB's introduction of the E10+ rating in 2005, many games that previously straddled the line were bumped up from E (as in The Legend of Zelda: Ocarina of Time 3D) or down from T (as in the original Ratchet & Clank trilogy). Another common example is PEGI's increasing strictness towards promoting gambling to children: New Super Mario Bros. was bumped up from 3 to 12 for the Wii U Virtual Console release due to its gambling minigames, as were the 3DS Virtual Console versions of Pokémon Red and Blue.

Alternatively, a work's rating may be consistently the same for its versions or editions in one region, but different in another. What might be perceived as family-friendly for, say, Japan or Europe, may not be deemed adequate for younger players in the Americas. Once again, this can be traced to Values Dissonance and cultural perceptions towards content in media.

Contrast What Do You Mean, It's Not for Kids?, where something genuinely inappropriate for younger audiences is mistaken for being perfectly innocuous (often due to the Animation Age Ghetto). When this is invoked by the executives to generate new buzz in an old line, the affected installment has been Rated M for Money.

Note that this trope does not apply to series whose content has genuinely become Darker and Edgier. For those that do so which are or become dramas, see Cerebus Syndrome. For those which become or stay as comedies, those are Tone Shifts towards Black Comedy.

Alternative Title(s): Rated W For Why