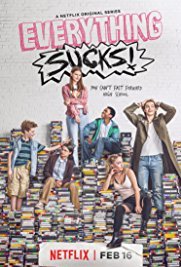 You can't fast forward high school.
Everything Sucks! is a 2018 Netflix original series. Set in 1996 in Boring, Oregon, it follows two groups of high school students who attend the cleverly named Boring High. The main group, the A/V club, is led by Luke O'Neil, who has a crush on Kate Messner and is best friends with McQuaid and Tyler. The second group is the Drama Club, older students who pick on the younger crew, in between presenting video announcements and enacting melodramatic theatre sketches in the cafeteria. After an incident involving the AV Club causes the Drama Club’s annual play to shut down, the two groups try to unite to make a sci-fi film in its place.

On April 7, 2018, the show was cancelled after its first season. You can sign a petition to save it here

Some of the many tropes included in the first season of the series include: