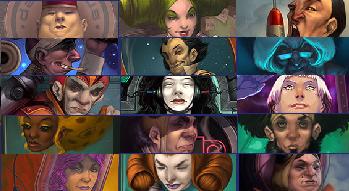 They all want to survive. Not all want everyone to.
Advertisement:

is an MMO released by Motion Twin studios. You play as one of sixteen characters aboard the spaceship Daedalus. However, two of the crew members have been infected by an alien species known as the titular Mush. The goal of the Mush is to convert all to the Mush Singularity, or at least kill everyone, while the humans need to make sure everything on the ship isn't constantly going haywire while trying to return home. Among all of this, the ship's AI Neron watches everyone, sometimes being helpful, other times... less than helpful.

Following the end-of-life of Flash, the game has essentially become defunct, although there have been a few efforts from both fans and the devs to keep the game playable - you can find some of the extensions [[http://mush.twinoid.com/tid/forum#!view/104909