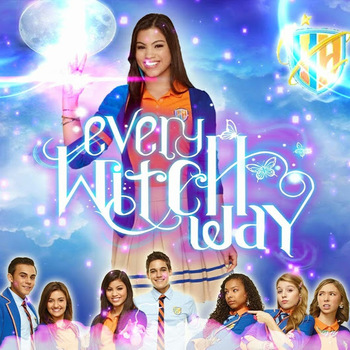 I cast a spell, it takes a hold of you!
Advertisement:

Emma is a new student who moves to Miami and starts attending Iridium High School. As she's unpacking boxes, she not only meets her new best friend Andi and Love Interest Daniel, but discovers she suddenly has magic powers when a flock of butterflies appears from nowhere (with Andi witnessing the spontaneous creation and putting it together immediately). At her first day of school, she runs afoul of local Alpha Bitch Maddie and her Girl Posse, the "Panthers" - and Maddie soon discovers she's also a witch. Emma and Maddie are soon set up to be rivals both at school and in the witches' realm as they compete to see who can be "The Chosen One." Unbeknownst to either them or their mentors, there's a third witch running around who's bent on stealing both Emma's and Maddie's powers and becoming the Chosen One herself.

In Season 2, Emma and Maddie are able to mend their relationship - but Maddie has lost her powers, and Emma has promised Daniel never to use hers again so that they can be a couple without violating the Witches' Council's rules on witch/human relationships. The temptation for Emma to use her powers proves to be too great, forcing the Witches' Council-members themselves to confront her. Under the transformation of a new moon, one of these council-members, Desdemona, develops plans on how she can use and exploit Emma for her own gains. Meanwhile, a new student at Iridium High, Jax, reveals himself as a wizard to Emma and promises being able to make her a very powerful witch under his mentorship - but what are his own plans for Emma?

In Season 3, a mysterious girl named Mia enters into the picture with her own plans - what special interest does she have in store for Emma and her friends? The third season also played the Emma-Daniel-Jax love triangle up to eleven.

The first season was part of Nickelodeon's "One Month Event", which means that the episodes aired from January 1 to January 30, for a total of 20 episodes. On March 13, 2014, Nickelodeon commissioned a second season of Every Witch Way, which started airing July 7th with the production of a third season announced in August and airing in January 2015. Nickelodeon also announced a spin-off series called W.I.T.S. Academy about a boarding school for witches as well as the fourth and final season of Every With Way airing in a one-month event for July 2015.

Tropes seen in Every Witch Way: