Caught with Your Pants Down 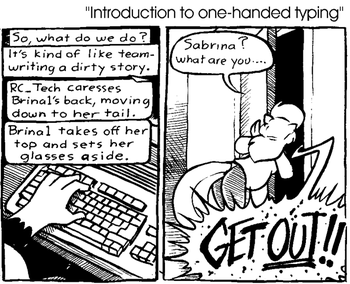 Contrast with I'll Be in My Bunk, when a character leaves the room in an awkward and obvious fashion which makes it clear that they are headed out for A Date with Rosie Palms.

You'd think that since they can't touch, they might have resorted to mutual voyeurism as one of the only forms of sexual activity that would allow them to safely be in the same room, but Ned is a very self-conscious person.

I was...just looking for the sports channel, Gary."

Alternative Title(s): Caught With Their Pants Down

I was...just looking for the sports channel, Gary."