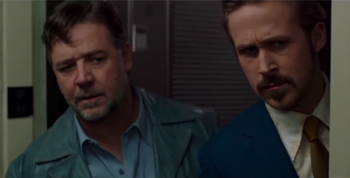 What a pair.
March: Look on the bright side, nobody got hurt.
Healy: (beat) People got hurt.
March: I'm saying they died quickly though, so I don't think they got hurt.

Yet another Film Noir-meets-Black Comedy from Shane Black, The Nice Guys is a 2016 Buddy Cop/Detective Drama flick starring Ryan Gosling and Russell Crowe.

Opening in mid 1977, Jackson Healy (Crowe) does a job where he sends a message to Private Detective Holland March (Gosling), breaking his arm for easy cash. Soon after, Healy is contacted by a higher up of the Department of Justice wanting her missing daughter found, prompting him to make peace with March so they can try and find the girl as a duo. Of course, things start to get bad when they start finding ties to an apparently irrelevant pornstar's death and even involvement with the mob.

Released on May 20th, 2016, the standard trailer can be viewed here,

and red band trailer can be viewed here.

Tropes found in The Nice Guys