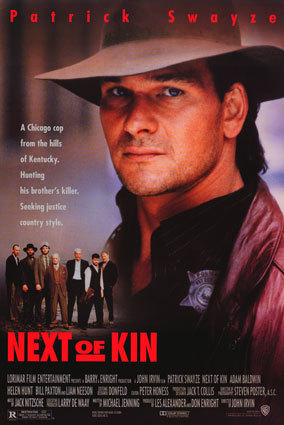 Next of Kin is a 1989 film starring a veritable Who's Who of actors. It stars Patrick Swayze, Liam Neeson, Adam Baldwin, Ben Stiller, Helen Hunt, Andreas Katsulas, Bill Paxton, and Ted Levine.
Advertisement:

The story centers around Truman Gates (Patrick Swayze), a Chicago police officer from Kentucky. When his brother Gerald (Bill Paxton) is killed by the Chicago mafia, his brother Briar (Liam Neeson) comes to town seeking revenge. Meanwhile, Adam Baldwin plays Joey Rosselini, an enforcer for the Isabella crime family who finds his position in jeopardy due to the don's son (Ben Stiller) trying to play a more active role in the family business.

Next of Kin provides examples of: