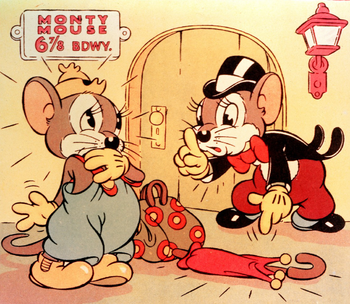 Exactly What It Says on the Tin, a cousin who hails from the rural parts of the nation. This trope usually comes into play on shows set in the suburbs or the city, and it usually takes the form of the cousin (or cousins) coming to visit or one of the show's main characters going to the country to visit the cousin. Either way Hilarity Ensues.

Doesn't necessarily have to be a cousin; it could be any relative. Cousin is just being used as a general term here, since it is somewhat of a common phrase.

Compare Country Mouse; while that trope usually applies to characters who are naive and central to the cast, this more applies to a character with more or less any personality (though stereotypes applying to the country will usually be apparent) and is at most a Recurring Character. May overlap with Half-Witted Hillbilly in comedic works.

See also The City vs. the Country.

Planton's been away from home longer then he thought

Planton's been away from home longer then he thought