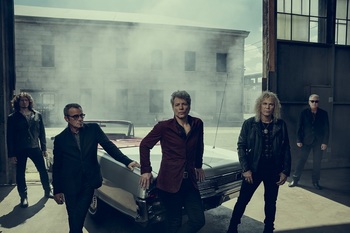 Bon Jovi is an American hard rock band from Sayreville, New Jersey. Fronted by lead singer and namesake Jon Bon Jovi, the group originally achieved large-scale success in the 1980s. Over the past 25 years, Bon Jovi has sold over 120 million albums worldwide, including 36 million in the United States alone.

Bon Jovi formed in 1983 with John Francis Bongiovi Jr. aka Jon Bon Jovi, David Bryan, Alec John Such, and Tico Torres. Richie Sambora joined shortly afterwards. Other than the departure of Such in 1994 (which pared the official lineup down to a quartet - his replacement, Hugh McDonald, did not become an official member until 2016), and Sambora in 2013 (replaced by touring member Phil X, who was an unofficial member until 2016 when, like Hugh, he was made an official member), the lineup has remained more or less stable. After two moderately successful albums in 1984 and 1985, the band scored big with Slippery When Wet from 1986 and New Jersey from 1988, which sold a combined 19 million copies in the U.S. alone, charted eight Top Ten hits (including four number one hits), and launched the band into global super stardom.

After non-stop touring, the band went on hiatus after the New Jersey Tour in 1990, during which time Jon Bon Jovi and Richie Sambora both released successful solo albums. In 1992, the band returned with the double platinum Keep the Faith and has since created a string of platinum albums throughout the 1990s, 2000s and 2010s.

The band is closely associated with the 1980s Hair Metal era, but were one of the few bands from that genre to retain their popularity after the Grunge explosion of the early 1990s. This had to do with their move towards softer pop ballad, which made them staples on adult contemporary radio. This ultimately resulted in them permanently changing their sound to a much less metal-oriented style.

"You give tropes a bad name":

Bon Jovi plays a somber unplugged version of "Livin' on a Prayer" during a 9/11 telethon.

Bon Jovi plays a somber unplugged version of "Livin' on a Prayer" during a 9/11 telethon.