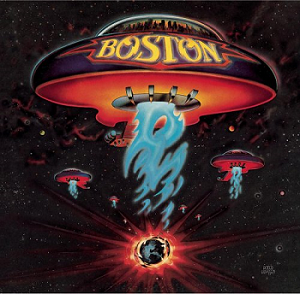 So many people have come and gone
Their faces fade as the years go by
Yet I still recall as I wander on
As clear as the sun in the summer sky...
"More Than a Feeling"
Advertisement:

The Arena Rock group behind one of the highest-selling debut albums ever, Boston is an American rock band from Boston, Massachusetts (hence the name) that achieved its most notable successes during the 1970s and 1980s. Centered on guitarist, keyboardist, songwriter, and producer Tom Scholz, the band is a staple of Classic Rock radio playlists. Boston's best-known works include the songs "More Than a Feeling

Their album covers often have a Sci-Fi motif to them with the guitar-shaped flying saucers.

Don't look back, a new trope is breaking: