The Hand Is God 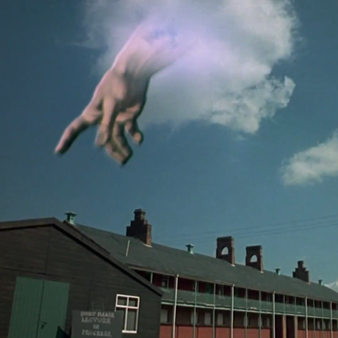 "Don't stand there gawpin', like you've never seen the hand of God before!"
"I have been chosen by the big metal hand in the sky!"
— High Elf Priest (if clicked on enough times), Warcraft III
Advertisement:

What does God look like? This has been the topic of many a debate. Artists have depicted God in many different ways, after all. Is God black or white? Man or woman? Does God even look like a person at all? What If God Was One of Us?

Or what if He's just a big, disembodied hand in the sky? Is it the hand of God? No, the hand is God.

Put simply, this is where a deity is depicted as a disembodied hand or hands. It may be implied that He still has a body somewhere, but it's obscured by mountains, clouds, light, energy, or any number of other things... or maybe it just isn't there at all. Usually, this hand will be giant-sized, coming out from the sky, and possibly accompanied by a booming voice, though those attributes aren't strictly necessary. For example, the hand of God which appears in the Book of Daniel is apparently normal size, appears inside a building, and is completely silent.

The important thing is that only the hand and at most part of the arm is ever seen. In medieval artwork, the hand of God was usually just that, stopping just before the wrist. Some depictions go a little bit further up the forearm. It will almost never reach the elbow, and if it reaches all the way to (or past) the shoulder, then it's definitely not this trope anymore.

This trope is Older Than Feudalism. The image of the hand to symbolize God occurs quite a lot in the Pentateuch, and it was popular in artwork from the late Antique and early Medieval periods when full-body images of God were considered close enough to idolatry to be heretical. Since hands are naturally the human body part most used for doing things, the disembodied hand therefore could be used to show agency and action from a supernatural force, without risking heresy by attempting to show the full form of God.

Is a subtrope of The Faceless. See also He Who Must Not Be Seen, and A Form You Are Comfortable With.