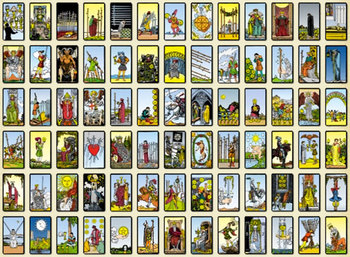 It is important to note that Tarot cards can come in two positions: upright, with the name of the card in the bottom, and reversed position, with the card upside down. Every card has a whole new set of different meanings when reversed. Depending on the reader, this can mean the opposite of the regular reading, that the regular energies of the usual meanings are blocked or in overdrive, or it simply represents an associated challenge. It's still important to note that even so, reversed cards are neither good nor bad. They just add new meanings. Some interpretations do away with this, holding all cards to have potential dual meanings based on situation and circumstance.

open/close all folders
Major Arcana
The cards of the Major Arcana are numbered 1 to 21, usually in Roman numerals, with The Fool designated as either first or last ("0" or "22"). Read in order, they can portray a kind of story - a journey that starts with blissful ignorance and brings on spiritual self-discovery from teachers and family, of easy successes and sudden failures, of never giving up, of facing the worst and freedom from your illusions, of hope, and continuing your journey regardless, and victory, and glory, and the world restored. And while it all leads to enlightenment, it leads to another journey...:
Minor Arcana Part 1: The Number Cards
Minor Arcana Part 2: The Court Cards

The Pages: Typically represent a message of some kind, or it refers to a child or child-like person.

The Knights: Represent movement or travel, types of energy in one's environment, or an adolescent or teen-like adult.

The Queens: Represent various types of creation or development, or adult women.