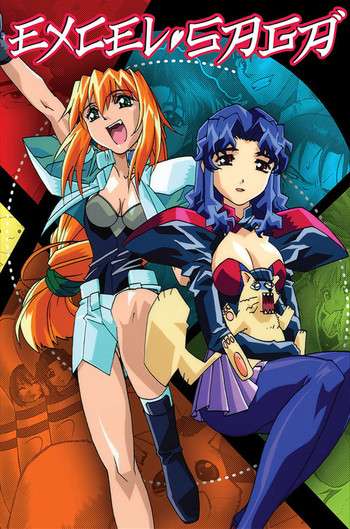 "There is one Earth! If it splits in half, there'll be two! All mankind is scum — and bee-yoo-ti-ful!"
— Excel
Advertisement:

Having nothing to do with Microsoft Excel (although the software makes a brief appearance in episode 5), Quack Experimental Anime Excel Saga (エクセル・サーガ, Ekuseru Saaga) tells the story of recent high school graduate Excel Excel. She's a small-brained but highly energetic Genki Girl who finds her ideal job serving as a minion to the mysterious Lord Il Palazzo, leader of the subversive yet Fascist, but Inefficient organization ACROSS.

As she undertakes missions intended to unravel the fabric of Japanese society so that ACROSS can step in and take over, Excel pines for her impressively Bishōnen, and impressively eccentric, boss Il Palazzo, who spends most of his time when his minions are out on missions sitting around his headquarters playing dating sims or practicing on his guitar. Il Palazzo, on the other hand, views Excel as a necessary annoyance who is to be killed as required, or at least dropped through a Trap Door into an oubliette, when she gets out of hand. If it weren't for the frequent interventions of the Great Will of the Macrocosm, Il Palazzo would be going through minions like Kleenex.

Excel's partner is Hyatt, a frail, beautiful alien girl given to bouts of coughing up horribly poisonous blood and frequent, brief attacks of death. Together with their dog/backup meal source Menchi, Excel blasts her way though a series of adventures with gleeful incompetence and a hysterically rapidfire stream of dialogue that makes, at best, only minimal sense.

At the same time, a city official, the mysterious Kabapu, has hired Excel's next door neighbors to form a counter-insurgency team that will inevitably come into conflict with the forces of ACROSS. Meanwhile, on yet a third plot thread, immigrant laborer Pedro, who dreams of earning enough money to leave Japan and return to his young son and sexy wife, dies in a terrible construction accident caused by Excel. He must now roam the world alone as a ghost, at least until the Great Will of the Macrocosm encounters him and decides he's cute. Interleaved into all three plotlines and running along on a fourth one of its own are the adventures of Nabeshin, the Marty Stu / Parody Sue and self-insert character of director Shinichi Watanabe, who can best be described as Shaft reincarnated as an Asian guy wearing a Lupin III costume.

The series, which ran from October 1999 to March 2000, is adapted from the original manga by Rikdo Koshi, but only very loosely; this is actually the core gag of the anime, with pre-title sequences that feature Rikdo giving, or being violently coerced into giving, his permission for his creation to be warped, twisted and re-imagined into a completely different genre every episode. As a result, each episode it dedicated to skewering a particular genre of anime or manga, inverting and demolishing its cliches and conventions while leaving behind a trail of sight gags, puns and the just plain bizarre. Incredibly, it manages to tell something approaching a coherent storyline at the same time. Hilariously funny and at the same time mind-warpingly strange. As one member of the fan community has said: "Excel Saga — when crack is not enough."

Has a Non-Linear Sequel in the form of Puni Puni Poemi.

This page is for tropes that apply to the anime only. For the original manga, check here.

Wear a helmet and there's nothing to worry about!

Wear a helmet and there's nothing to worry about!