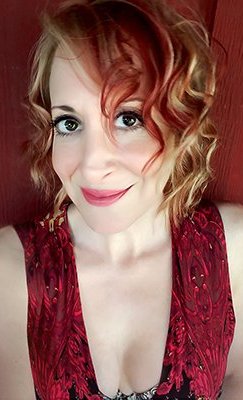 "No fair! I wanted that part, but it was dubbed in Canada!" note This was back before Sailor Moon's 2014 redub in L.A..
Advertisement:

She has a BFA in acting from Southwest Texas State University, and was a company member of the Emerging Artists Theatre. She has also performed as a stage actress in several productions, including an Off-Off Broadway production of The Glass Mendacity.

In June 2002, during the recording of the role of Excel from Excel♡Saga, Calvello strained her voice and was replaced by Larissa Wolcott. Calvello was also replaced as the voice actress for Yuri in Dirty Pair by Allison Sumrall. She has since recovered and returned to voice work, although she moved to New York and worked exclusively there for the next 11 years before finally moving back to Texas in 2013. Among her first roles since moving back to Texas were Eclair in Fairy Tail the Movie: Phoenix Priestess, Saori Takebe in the English dub of Girls und Panzer, Hange Zoë in Attack on Titan, and Kanako Miyamae in Maria†Holic.