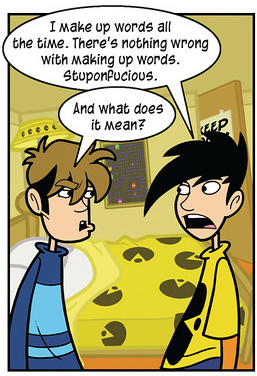 Mrs. Krabappel: "Embiggens"? I never heard that word before I moved to Springfield.
Ms. Hoover: I don't know why. It's a perfectly cromulent word.
— The Simpsons, "Lisa the Iconoclast"
Advertisement:

A character quotes a seemingly made-up word that no one has ever heard of before then. This is usually a word the writer just made up but is occasionally a real obscure, archaic or obsolete word; for instance, 400 years before we had computers, we had email, which is a raised or embossed image pressed into metal (and pronounced EM-eye, because it's French), and "unfriend", which meant exactly what it does today (just at the tavern, rather than on Facebook).

A type of Neologism (for the many cases where the word is new), of which Scrabble Babble is a Sub-Trope. Some examples are another form of Malaproper. See also Delusions of Eloquence and Informed Obscenity. Characters who primarily talk in these are known as a Neologizer. Not to be confused with Buffy Speak which is a lack of nuance and sometimes making new compound words, not entirely new words. For words that are actually not new, it may be a case of either Accidentally Correct Writing or Shown Their Work.

Named for an exchange from an episode of The Simpsons. Incidentally, the word embiggen was later used in a completely cromulent paper on string theory. It's on pages 28 and 31 here.

It has also been added to Webster's dictionary and Dictionary.com.

Humorously, the word "gruntled" is a real word

, used correctly by Michael in this context.

Later, a shrunken Mermaidman asks "Did you set it to wumbo?"

SpongeBob invents a new word for being tricked.

Alternative Title(s): Made Up Word, Making Words Up

SpongeBob invents a new word for being tricked.