Series / Not Necessarily the News 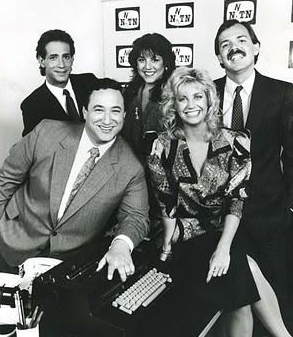 Not Necessarily the News was a comedy program that aired on HBO from 1982 to 1990. Based on the British TV series Not the Nine O'Clock News, political satire was the show's stock in trade, as the ensemble poked fun at the headlines of the times, not to mention the news media itself.

From 1982 to 1987, NNTN was structured like a sketch comedy interspersed with commercial parodies and satirized news items. Then, after a brief hiatus, the show returned in 1989 with a "Weekend Update"-style format, centered on the news anchors but still containing humorous takes on the news and some fake commercials. Unfortunately, most of the audience's reaction was They Changed It, Now It Sucks!, and the retooled NNTN was done after only one season.

The show is credited with starting or boosting the careers of Rich Hall, Jan Hooks, Conan O'Brien and Greg Daniels, all of whom worked on Saturday Night Live after this show.

Officials at TV Tropes have confirmed that the following tropes were affiliated with Not Necessarily The News: