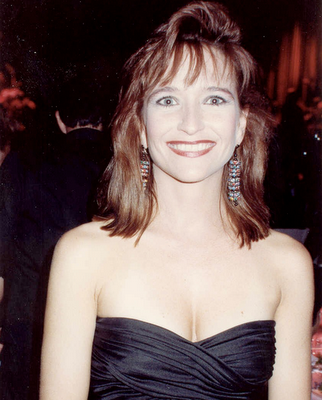 Janet Vivian Hooks (April 23, 1957 - October 9, 2014) was an American actress and comedian best known for Saturday Night Live (Hooks was a part of SNL's second Golden Age in 1986note the season that had Dana Carvey, Phil Hartman, Kevin Nealon, Victoria Jackson, and the good cast members from season 11: Jon Lovitz, Nora Dunn, Al Franken, Dennis Miller, and A. Whitney Brown, after the 1985-1986 season was deemed a disaster. Ironically, Hooks originally auditioned for the 1985-1986 season, but lost to Joan Cusack), Designing Women, 30 Rock and The Simpsons (as the voice of Apu's arranged wife, Manjula. She was later replaced with Tress MacNeille).

Some of Hooks' notable recurring characters include: Miss Connie (the host of a children's story time show called Miss Connie's Fable Nooknote it was also one of the few times that Dennis Miller appeared outside Weekend Update), Candy Sweeney (a lounge singer along with her sister, Liz [played by Nora Dunn]), and Anita (a truck stop waitress). Her celebrity impressions include Bette Davis, Greta Garbo, Tammy Faye Bakker, Oprah Winfreynote since SNL wouldn't have another black female cast member until the early 1990s with Ellen Cleghorne, they had to put Hooks in brownface for it, Nancy Reagannote replacing Terry Sweeney from the season 11 cast as her, Diana Rossnote also in brownface and also replacing season 11 cast member Terry Sweeney as her, Mary Jo Buttafuoco, Ivana Trump (Donald Trump's first wife), Marla Maples (Donald Trump's second wife), Jessica Hahnnote the model and actress who accused Tammy Faye Bakker's husband, Jim, of rape back in the 1980s, and Sinead O'Connornote around the time that she got in trouble for ripping Pope John Paul II's photo on the season 18 Saturday Night Live episode hosted by Tim Robbins. Even though Hooks left the show during the 1990-1991 season [season 16], she did come back to play O'Connor

She sadly died in 2014 at home from throat cancer.