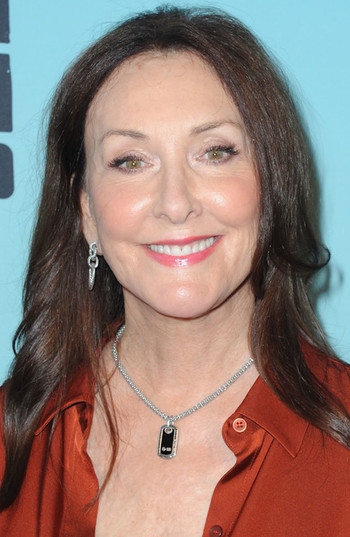 The woman of a thousand voices.
Advertisement:

Teressa Claire MacNeille (née Payne; born June 20, 1951) is an American voice actress best known for providing various voices on the animated series The Simpsons, Futurama, Rugrats, All Grown Up!, Tiny Toon Adventures, Animaniacs and many Disney projects (even being the current official voice of Daisy Duck and Chip).

Her most notable characters on The Simpsons include Agnes Skinner (Principal Skinner's controlling mother), Brandine Spuckler (Cletus the Slack-Jawed Yokel's wife/sister/cousin), Dolph Starbeam (one of the three bullies, along with Jimbo Jones [whom Tress initially voiced, but was replaced with Pamela Hayden] and Kearney Zzyzwicz), and Lindsey Naegle (the generic businesswoman/network executive/image consultant/financial planner), while her performance as Mom (a cruel, elderly businesswoman) is her most notable Futurama role. She even became the voice of Daisy Duck in 1999. MacNeille has also done dubbing work on English language anime translations. She was also the voice of Leon from Lilly the Witch. She's been the industries' go-to voice for old lady characters for quite some time, and it's always easy to recognize her.

MacNeille sang and appeared in the music video for "Ricky" by "Weird Al" Yankovic, which was based on the I Love Lucy television show and parodied the song "Mickey" by Toni Basil. (MacNeille, obviously, was Lucy.) She also appeared on Yankovic's 1999 album, Running with Scissors, on "Jerry Springer", and did several one-shot voices on The Weird Al Show. MacNeille also appeared as an angry anchorwoman in Elvira, Mistress of the Dark and served as the voice of Elvira's Great-Aunt Morganna Talbot. She also dubbed a helicopter-based news reporter, Kelly King (played by Walker, Texas Ranger actress Sheree J. Wilson), for Universal Studios' Kongfrontation, alongside New York newsman Rolland Smith (best known as the "Fighting the Frizzies" guy, then employed at WWOR-TV 9, which was MCA-owned at the time) the footage of King dated back to 1986 when the King Kong Encounter ride opened at the Hollywood park (there, the in-studio anchor was Sander Vanocur).

Due to the sheer amount of voice work in her resume, Tress is no doubt a Woman of a Thousand Voices and is considered the female equivalent of Frank Welker, Billy West, Mel Blanc, and Jim Cummings.

Voices on The Simpsons:

Example of:
Voices in One Room