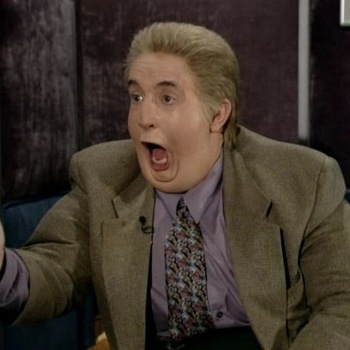 Primetime Glick was a comedy series that aired on Comedy Central from 2001 to 2003. It starred Martin Short (in a fat suit and convincing facial make-up) as clueless interviewer Jiminy Glick, who would fawn over celebrities, despite knowing next to nothing about them (and frequently getting facts about them wrong). He also had a penchant for unknowingly insulting whoever he talked to. Jiminy was joined by his bandleader, Adrian Van Voorhees (Michael McKean), who took the brunt of his abuse. An elderly, cranky woman named Miss Gathercole (also played by Short) appeared in the studio audience of every show and often shouted complaints at Glick.

In-between the interviews were "Jiminy's Home Movies" (featuring Jan Hooks as Dixie, his chain-smoking, drinking, pill-dependent wife), "Lalawood Fables" (marionette reenactments of grisly Hollywood murders and other scandals), and fake commercials and trailers. Some arguably verged on being tasteless (Jiminy pretending to be an Asian stereotype at Bob Jones University) or not being as funny due to recent events (the Tom Green/Osama Bin Laden sketch being a prime example- keep in mind it was filmed only a few months before 9/11), but there were plenty of hilarious ones like the film parody "An American Pope" (featuring Martin Short as Tommy Lee Jones!) and Adrian's "Harp Accompaniment For Your Sensual Massage" CD, among others.

Much of the humor simply came from how bizarre Glick was. He would randomly lower and raise his vocal pitch, frequently stuff his face (to the point where he couldn't talk) while talking to the bewildered guest, fidget uncomfortably in his chair and fall over, and make out-of-nowhere non sequiturs. For instance, one time while interviewing Rob Lowe and asking why he doesn't have a Southern accent despite being from the south, Glick went into a string about Sinatra's ex-wives and ended by asking Lowe what his opinion was on Barbara Sinatra. Being that the interviews were improvised, many crazy moments could occur between Glick and the guests.

It ran for 30 episodes. Sadly, only five episodes from Season 1 and The Movie Jiminy Glick in Lalawood are out on DVD.