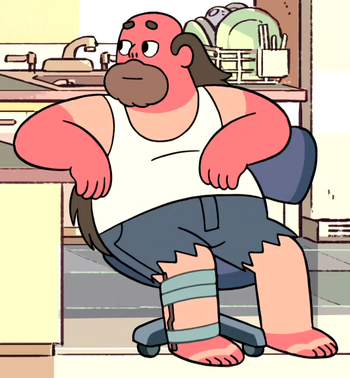 How he keeps those tan lines when he always wears that tank top is a question for another time.
Advertisement:

Tan Lines occur when the human body gets tanned in areas of exposed skin but the places previously covered during the tan look noticeably lighter. They are usually seen as a way to make a character look funny after a bad or flawed tan job. Other forms include the farmer's tan (face, neck, and both arms, from being out in the field while wearing a T-shirt or overalls) and the trucker's tan (face and one arm, from the sun shining through the windshield on the face, but with the pale arm inside the cab and the tan arm out the window).