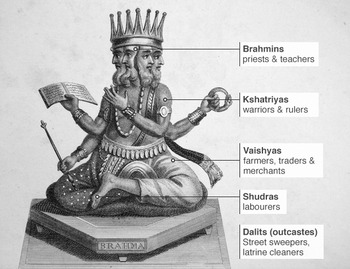 The caste system is a powerful institution prevalent in Indian society today, and was formerly prevalent in Nepal until a law passed in 1962 made it illegal to discriminate against other castes. For many Indians, caste is a major aspect of their identity. It is something one is born into. People are expected to marry (and in some places, even socialize) within their own caste. A person inherits their parents' caste, and it cannot change regardless of what job they have or how much wealth they accumulate.

Modern caste identity is something akin to ethnicity or race, and as with race, some caste groups are distinctly disadvantaged. And though there is a strong relationship between caste, occupation, and economic status, it is not as homogeneous or simple a system as Westerners are led to believe. Its power varies across India and across time. People can and have taken occupations outside those associated with their caste, historically as well as in the present day.

The Manusmriti theoretically divides society into four varnas (a Sanskrit word which means type, order, or class) listed below, which can be further divided into jatis (clans, tribes, communities and sub-communities, and religions).

Contrary to popular belief, these are not the castes. There are thousands of groups in India that are called castes (such that it would be difficult to list all here in any meaningful way) and an Indian will identify with one of these thousands of groups rather than one of the varnas. The varna of Brahmins and Dalits, though, is truly a large part of their identity.

The concept of jati is closer to the actuality of caste, and in fact the two words "jati" and "caste" are often used interchangeably in India. There is not always a clear-cut hierarchy because there are a lot of jatis, and they change across region and time. Castes can also arise from various ethnic, tribal, or religious divisions (i.e, not solely from class or occupational divisions). In addition, there can be overlap and redundancy, with more than one jati occupying the same "niche" of occupation or function.

Although the British, relying on the Manusmriti to govern Indians, did use the varna system for categorizing the castes, varna has little practical relevance today except in the case of the brahmins and the dalits. It was a simple theoretical system imposed imperfectly upon a large and complex real one. So, because people cannot be neatly cataloged, the two concepts of jati and varna are not inflexibly linked, and the lines can be blurred, with some castes not clearly belonging in a varna, some belonging to multiple, and some moving around in status.

The Indian Government classifies people into castes in order to run affirmative action programs as it reserves some seats in the various national and state legislatures for disadvantaged castes, as well as universities. This is subject to controversy similar to debates about affirmative action in the United States. Intermarriage between castes does take place, but is unusual. With arranged marriages, often people will specify what caste they want potential partners to belong to. Caste-based political parties also exist, although most of them represent the interests of historically oppressed communities.

See Knight Fever for hereditary peerage and the associated noble titles (along with non-hereditary titles) in Britain, Fantastic Caste System for fictional caste systems not related to Indian traditions, Hive Caste System for the hierarchy determined by birth in an insect society, and Blue Blood for high-born families in any setting. Compare Fantastic Racism Also see Star-Crossed Lovers, for instances where they face difficulties due to this system being in effect.