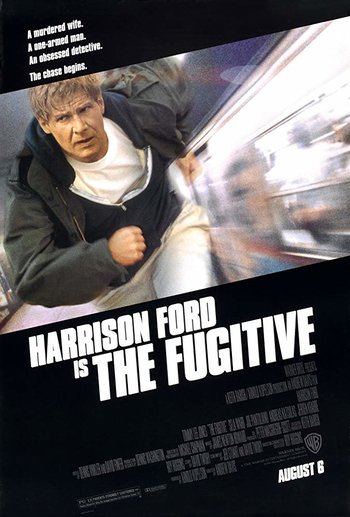 "Listen up, ladies and gentlemen. Our fugitive has been on the run for ninety minutes. Average foot speed over uneven ground barring injury is four miles an hour; that gives us a radius of six miles. What I want out of each and every one of you is a hard-target search of every gas station, residence, warehouse, farmhouse, henhouse, outhouse, and doghouse in that area. Checkpoints go up at fifteen miles. Your fugitive's name is Doctor Richard Kimble. Go get him!"
— Deputy Marshal Samuel Gerard
Advertisement:

The Fugitive is a 1993 action thriller film directed by Andrew Davis, based on the classic 1960s TV show.

Dr. Richard Kimble (Harrison Ford), a respected Chicago cardiovascular surgeon, returns home one night to find his wife Helen (Sela Ward) brutally murdered by an intruder, a one-armed man. The killer flees and the police disbelieve Kimble's story as lots of circumstantial evidence makes him look guilty, so he's wrongfully convicted of his wife's murder. Soon after, he escapes from custody and returns to Chicago, determined to find the real killer. Kimble also must contend with a dogged team of U.S. Marshals, led by Deputy Marshal Samuel Gerard (Tommy Lee Jones), who pursue him relentlessly. Both Kimble and Gerard eventually discover that the chase's bigger than the both of them, and that several parties involved actually want to see Kimble dead.

The film was highly acclaimed by both critics and moviegoers, spending six weeks as the #1 film in the United States, and grossing a total of $369 million worldwide against a $44 million budget. It was also nominated for seven Academy Awards, including Best Picture; Tommy Lee Jones won the Oscar for Best Supporting Actor. It had a spin-off in 1998, U.S. Marshals, which featured Gerard and his team pursuing another fugitive and also inspired the hilarious spoof film, Wrongfully Accused starring Leslie Nielsen, released in 1998.

It's notable for being one of the first successful major films ever to be based on a television series, something which used to be fairly rare (the Star Trek movies notwithstanding) before this film popularized it. Thanks to the old "Thirty-Year Cycle", films based on television shows from the 1960s became particularly common throughout the remainder of the '90s—with The Addams Family, Mission: Impossible, The Brady Bunch, The Beverly Hillbillies, and The Flintstones being among the most famous. Even McHale's Navy and The Mod Squad got made into movies in the '90s (although you probably don't remember them).

Julianne Moore has a small part as the doctor at the hospital where Kimble goes looking for evidence. Jane Lynch has another small part as a lab technician.

The Fugitive was one of the first four films to be released on DVD when the format debuted in Japan in 1996, together with Eraser, Assassins, and Blade Runner: The Director's Cut.

Not to be confused with the 1947 film directed by John Ford and starring Henry Fonda, which is a loose adaptation of The Power and the Glory.

The Fugitive provides examples of the following tropes: