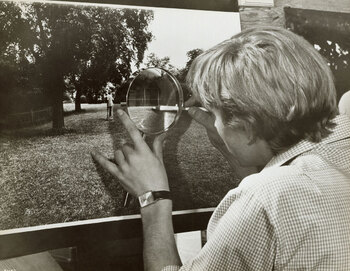 What can he see?
Advertisement:

Something happened or someone did something they don't want a detective (or pseudo-detective) to know about. They may be Beneath Suspicion. Well, too bad for them, because it just happened to get caught in a photograph that reveals their guilt or implicates them in whatever happened. This can be a common reason for having a Camera Fiend among the cast.

A photographic counterpart to Caught on Tape, although frequently less damning due to the still nature of photographs. It may also be a literal Meaningful Background Event and can demand extensive use of the Enhance Button.

Compare Surveillance as the Plot Demands, which is also about characters improbably having cameras everywhere, but the effect is usually very different. In supernatural works, expect a lot of overlap with Spooky Photographs. Family Portrait of Characterization is one very specific subtrope. Compare with Removed from the Picture, with which it is technically an inverse (because it's specifically about what's not in the photograph), but often exploits the same principle (that there's a very clear, important piece of information in the photograph).