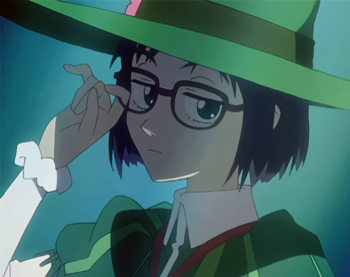 She looks good and sees good!
"You don't even need them! You just think they make you look a bit clever."
— The Tenth Doctor, to the Fifth Doctor, Doctor Who, "Time Crash"
Advertisement:

Usually, only people with vision problems go to the trouble of getting a pair of glasses. But sometimes, we have a character who dons a pair of spectacles even though they have perfect eyesight. The Purely Aesthetic Glasses are just there to make the character look smart, sophisticated, scary, sexy and/or cute. However, whether they really do make the wearer smart, sophisticated, and cute is variable. Another possibility is wearing glasses as part of a disguise, to impersonate a glasses-wearing person or simply as a bit of facial concealment.

See also: Glasses Curiosity and Goggles Do Nothing. Contrast Universal Eyeglasses, where the glasses do correct eyesight, but work for anyone, regardless of prescription.

Alternative Title(s): Brainy Specs, The Glasses Do Nothing