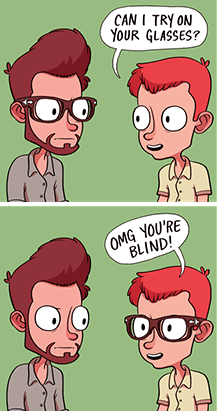 Steven: [wearing Connie's glasses] How do I look?
Connie: [squints] I have no idea.
— Steven Universe, "An Indirect Kiss"
Advertisement:

Bob wears glasses, and Alice does not. One day, she asks him, "Can I borrow/see/try (or try on)/wear your glasses?" He gives them to her, and she'll likely comment on either how bad his vision is or how cute/smart she feels/looks (or both). Another common scenario is Alice just randomly yanking them off his face and putting them on.

There are a few reasons a character might want to wear another's glasses. As stated above, they may want to look "cool" or "smart". Similarly, they may just be curious if they've never worn glasses themselves. Both or either could potentially lead to the character taking a "glasses selfie," depending on the setting. Another, more practical, reason is that they're having trouble seeing something far away or reading something, and might need glasses of their own. (If this works, they have Universal Eyeglasses.) When a bully does this, it's usually to mock their victim, especially if said bully is engaging in a game of Keep Away.

Asking to try on someone else's glasses could be a way of flirting with them. Most of the time, when somebody (real or fictional) snatches the glasses off of someone's face without asking first, they come off as rude and are demonstrating their inability to grasp the basic concept of personal space.

A less common situation is when a character who already wears glasses wants to swap specs with another to see who has the stronger/weaker prescription.

Truth in Television, as many glasses wearers can attest to. This behavior typically starts during infancy and lasts all through grade school, usually (but not always) tapering off during or after college, when people begin to realize how awkward and frankly bizarre it is to just take people's glasses off their faces. People doing this are normally trying to invoke Bespectacled Cutie, Glasses Are Sexy, and/or some combination of Nerd Glasses and Smart People Wear Glasses. It can also be a direct result or consequence of Hold My Glasses. Depending on the style of glasses, this could easily veer into Making a Spectacle of Yourself territory. Related to Blind Without 'Em and Dropped Glasses and very similar to Purely Aesthetic Glasses.

Can also function as a mild form of Obfuscating Disability.