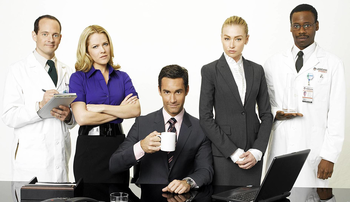 Better Off Ted was a quirky, cartoonish ABC series about a man with a conscience who works for a mysterious corporation without any signs of one. The series lasted from March, 2009 to January, 2010. A total of 26 episodes in two seasons.

Ted Crisp (Jay Harrington) is the head of Research and Development for Veridian Dynamics, a company that manufactures anything and everything that could make them a profit (weaponizing pumpkins and cryogenically freezing employees is just the tip of the iceberg - no pun intended). His boss is Veronica Palmer (Portia de Rossi), a terrifyingly go-getter executive always looking to cut costs and seem intimidating so that employees do not feel encouraged to talk to her. Although Ted and Veronica had a brief affair, neither seems to be holding a torch for the other in the first season, though in the second season their friendship deepens. On the other end of Verdian Dynamics' employee list is Linda Zwordling (Andrea Anders), a sweet, if off-beat, member of Ted's team who often provides the voice of humanity when the team gets carried away with science.

There is a definite attraction between Linda and Ted, which is hampered by his "one office affair" rule (his quota having been filled with Veronica), her returning boyfriend, and his fear of the effect his dating will have on his young daughter, Rose (Isabella Acres). Ted uses Rose as a moral compass when he must decide how immoral the mandates he receives from Veridian are (as the series progresses Veronica and Linda also bond). Actually developing the cutting edge inventions is the crack scientific team of Phil and Lem (Jonathan Slavin and Malcolm Barrett), two hilariously left-brain geniuses rarely seen without each other who provide some of the best comedy in the series.

Better Off Ted is a 30-minute Work Com with a twist (besides the insane and hilarious inventions that are produced by Veridian Dynamics that occasionally turn the series into stealth sci-fi); Ted often uses the camera as a confessional, breaking the fourth wall and offering commentary on the strange events constantly unfolding around him. Unlike in The Office, Ted is the only one who speaks to the camera and does it while going about his business (as opposed to The Office which takes the form of a documentary). Most (but not all) episodes also feature a faux commercial from Veridian Dynamics reflecting the theme of the episode. For example: "Man and Machines. Best Friends Forever (We Hope)."

In May of 2010, ABC announced it was pulling the plug on the show. The final two episodes produced for ABC were never broadcast by the network, receiving their broadcast premiere months later in Australia.