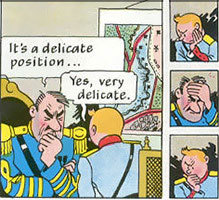 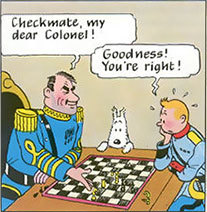 Ziva: In my professional opinion, the potential for serious injury is substantial.
Director Shepard: I agree. But there are protocols that have to be followed.
Ziva: Which are useless if it doesn't provide a tactical advantage!
Director Shepard: Don't underestimate appearances, Ziva. I have known entire missions to fail because an asset didn't button her lapel properly.
Ziva: [starts to speak but stops] I see your point.
Director Shepard: So we are in agreement?
Ziva: [nods]
[They both turn around to reveal Abby, holding a pair of heels in one hand and her boots in the other.]
Director Shepard and Ziva: Heels!
— NCIS, "Bloodbath"
Advertisement:

A trick, usually used for jokes, with a similarity to the Trick Dialogue.

Several characters appear to have a slightly cryptic conversation about how troublesome and dire their circumstances are. The cameras remain close to their faces, so the viewer gets a full view of their agonization, and sees the sweat dripping down the face. However, once a decision has been painfully accomplished, it's revealed that the characters are in no significant danger, but are just taking something mundane far too seriously. Board games are possibly the most common example as they allow discussion of tactics or how to spend resources, but there are plenty of other examples.

This can require some camera trickery to pull off, and the fact that a closeup of a character's faces is the only thing shown should be a major tip off, especially during The Teaser, where many of these take place.

See Trick Dialogue, where the participants of the conversation aren't who we think they are. See also Reveal Shot. Compare Anti-Climax Cut, Imagine Spot.

Lem and Phil have a trust-building exercise.

Lem and Phil have a trust-building exercise.