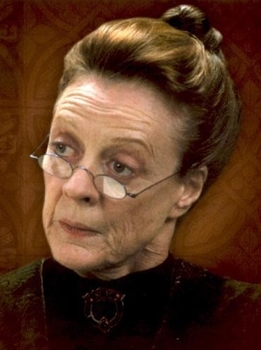 Don't ask her to let it down.
Sasha, however, was something else. She was fair and thin, and he guessed that she was once very pretty, having golden-blond hair. Kai never saw that much of it because it was pulled back. Her hairstyle and the worry-lines in her face were making her appear old before her time. She always stood in the corner sighing to herself. Sasha was a very kind and welcoming woman, but now she had to struggle to be kind because of all the tension in the house.
— Karen's Story

The bun as a hairstyle has long indicated a very specific character type. It shows a woman as neat, prim, proper, and organized. As such it tends to be favored by Proper Ladies, librarians, School Teachers, nannies, doctors, serious office ladies, and women of a certain age.

Characters with this hairstyle tend to be respected and be in charge. They also tend to be more conservative and tight-laced than other characters.

Naturally, it makes this hairstyle common for a Lady of War who chooses to eschew Tomboyish Ponytail or Braids of Action, though the latter could be easily converted into a bun.

Often times, this leads to Letting Her Hair Down if she decides to break out of that mold. Part of what creates the appeal of the Hot Librarian.

Note: This trope is for using visual shorthand to characterize an individual. It is not a trope for every character who happens to have a bun. Please remember this when editing the example list.