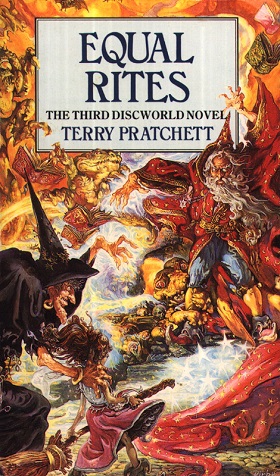 The last thing the wizard Drum Billet did, before Death laid a bony hand on his shoulder, was to pass on his staff of power to the eighth son of an eighth son. Unfortunately for his colleagues in the chauvinistic (not to say misogynistic) world of magic, he failed to check on the new-born baby's sex...
Advertisement:

Equal Rites is the third Discworld novel. This was the first to demonstrate the series was not simply about Rincewind, instead shifting to new locations and a new set of characters. It is the first book in the "witches series", although the setting is only half-formed. Pratchett himself noted later on that the Granny Weatherwax that features here is a much more limited character than the one that appears in fully crafted form by Lords and Ladies.

The plot begins with a dying wizard who wants to bestow his staff and power upon a suitable baby — an eighth son of an eighth son. However, due to some confusion, he does so to the eighth child of an eighth son, who happens to be a girl who is given the name Eskarina. The book centres around Eskarina being brought up and trained by Granny Weatherwax the witch, and muses on the difference between wizard magic and witch magic (broadly speaking, out of the sky and all mythic grandeur vs. out of the earth and to do with people). After failing to raise her as a witch because of the constant interventions of the sentient staff, Granny decides to take her to Unseen University in Ankh-Morpork to see what the wizards make of her. An up-and-coming (if gangly and clumsy) wizard genius named Simon provides added spin to Esk's quest to figure out just what kind of magic she's part of.

Because of the book's feminist slant and the fact that the name Terry can be unisex, a lot of female authors praised the book while assuming Terry Pratchett was a woman (this was, of course, before he was a near-household name), which is why copies these days usually have his photo on the back.

Preceded by The Light Fantastic, followed by Mort. The next book in the Witches series is Wyrd Sisters.