Watch Out for That Tree! 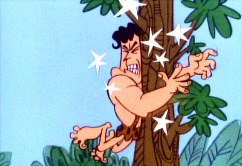 Wait, what tr— *WHACK*
Oh, that tree.
"Dumb place to put a tree — in the middle of a forest."
— Fiona Whittaker, Adventures in Odyssey
Advertisement:

The primary hazard faced by jungle-swingers, Giant Flyers, and even people at a fast run are not the Mooks in hot pursuit, the thunderstorms brewing up above, or the cars moving at Mach 1 in the street. It's... trees.

Well, trees, poles, walls and other decidedly immobile hazards, anyway. If a character is flying, swinging or even simply running through an area, and he happens to get distracted, he will wrap himself around the nearest obstacle in fairly even time. His momentum generally sees to it that he either gets completely flattened, or ends up with his arms splayed at weird angles.

This also happens a lot to people on skis, either comedy beginners or even good skiers who get overconfident. The viewer sees the hapless skier whose feet spread so that the skis are spread to left and right of a fast-looming inconvenient and very unyielding tree... and then... Ouch! That's Gotta Hurt!

A hazard on horseback, too. A horse is smart enough to avoid trees and branches — but it might not notice that a branch is just the right height to brain the unfortunate rider. Or worse, the Moody Mount might invoke the trope, maybe hoping to unseat the rider or just For The Lulz.

Moody mounts aren't the only risk of intentional attack. An enemy can lie in wait and pull a flexible branch back out of your path, compelling you to proceed, only to release it to whip you just as soon as you get in range. Similar to shutting the door in someone's face except you don't even know there is a door or a shutter.

While trees and poles are common targets, windows are as well. If a character runs into a window, expect to see a shot of his smushed face from the other side. Also expect to hear the slow squeaks as he peels off and slides to the ground. This specific subtrope is Glass Smack and Slide.

A subtrope of Amusing Injuries when it's Played for Laughs. Similar in principle to Not the Fall That Kills You…, which usually isn't. Compare Low Clearance, Belly-Scraping Flight, When Trees Attack.

Named for George of the Jungle, who did this so frequently, it's mentioned in his theme song.

Fry discovers that by the 31st century, technology can allow you to avoid trees while skiing... and then crash into them in entirely new ways.

Fry discovers that by the 31st century, technology can allow you to avoid trees while skiing... and then crash into them in entirely new ways.