Theatre / A Funny Thing Happened on the Way to the Forum 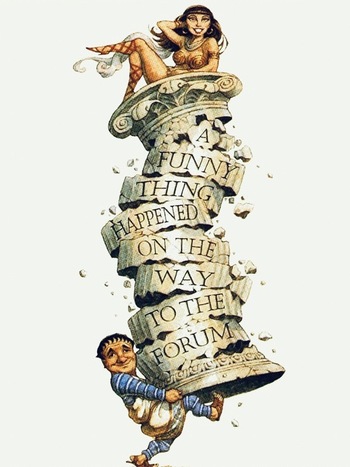 A Farce Musical based on the plays of Titus Maccius Plautus, with a book by Burt Shevelove and Larry Gelbart and music and lyrics by Stephen Sondheim. Set in Ancient Rome, it's about a slave, Pseudolus (Greek, "false liar"), helping his master's son Hero woo the Girl Next Door in exchange for his freedom. Along the way they get involved with the affairs of the houses on either side of them: one is a "house of ill repute" run by Marcus Lycus; the other the home of an old near-sighted man named Erronius (Latin errare, "to wander" or "to make a mistake").

Many puns appear in the names of the neighbors alone: Domina (Latin, "Lady," "female master") the Beloved Smother, Henpecked Husband Senex (Latin, "old man"), the son named Hero, panic-prone slave Hysterium, aforementioned error-prone old man Erronius, love interest Philia (Greek, "love, friendship" or possibly intended as the Latin "filia" meaning "daughter"), and Roman army captain Miles Gloriosus (Latin, "boastful soldier" and the title of a play by Plautus). The latter provides the main romantic competition, since Philia is a Bride for Sale and he has just bought her. Meanwhile, Erronius trots around trying to find his lost children, who were stolen in infancy (by pirates!) but are recognizable by an Orphan's Plot Trinket. And the only reason any of this can happen is because Senex and Domina are off visiting her mother, thus giving Pseudolus and Hero the run of the neighborhood... but Senex finds an excuse to come home and, err, ogle the merchandise, with his wife in hot pursuit (that's for those of you who have no interest in pirates). Of course, Hilarity Ensues.

The play opened in 1962, and did well enough to spawn a 1966 film adaptation and many revivals. The film, directed by Richard Lester, starred Zero Mostel as Pseudolus (reprising his part from the original Broadway production), Phil Silvers as Marcus Lycus, Michael Crawford as Hero, and Buster Keaton (in his final film role) as Erronius. Revival productions have featured, among others, Nathan Lane, Whoopi Goldberg, Geoffrey Rush and Gary Chalk.

Alternative Title(s): A Funny Thing Happened On The Way To The Forum