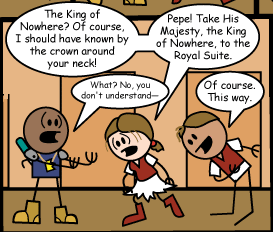 Someplace Else has a democracy.
The cast is expecting a special guest of some kind, be it a long lost relative, a critic who's come to review the restaurant/hotel/nightclub/what have you everyone works at, or even a celebrity. The thing is, the cast isn't sure what they look like or who to expect, and end up mistaking someone else for this guest. Whether intentional or not, the impostor wastes no time in taking advantage of the situation, demanding preferential treatment and leaving the other characters hopping to please them. Sometimes the fraud is exposed and sent packing, while the real guest shows up just in time. More often, however, there are some consequences for the cast, whether it's the real guest showing up after getting mistreated, or the fraud not leaving until he's milked the cast dry.
Advertisement:

An inverted form is also sometimes seen, particularly in series where the hero is Walking the Earth: it is the hero who is mistaken for special guest by the Townsfolk of the Week. Sometimes, this will lead to the hero using his assumed authority in his efforts to solve the town's problem, and then moving on just as the real guest arrives. Other times, the real guest will arrive partway through the episode, leaving the hero with a lot of 'splainin' to do — especially if (as is often the case) a dead body has turned up in the meantime. In yet other cases, someone may not have the guest's best interests in mind, meaning the hero will then have to deal with attempts by the mistaken thief/killer/seducer(/all of the above?) on their person.