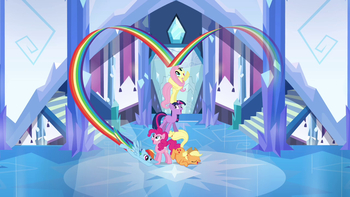 Rarity probably would have found doing this to be uncouth anyway.
"Two, four, six, eight!
Name a place that's really great!
One, two, three, four!
Keeps you coming back for more!
Two, seven, nine, three!
The place that we all wanna be!
Four, three, two, one!
The Crystal Empire, that's the one!"
— The Crystal Empire Welcome Committee Routine
Written by Dave Polsky
Advertisement:

Everypony is excited for the upcoming Equestria Games, but none more so than the Crystal Ponies, who are contending to host the games at the Crystal Empire. Because the Crystal Ponies are so worked up, Princess Cadance invites Twilight Sparkle and her friends to the empire to act as the welcome committee for the official games inspector, Ms. Harshwhinny. The six are determined not to let the princess down, especially Rainbow Dash, who doesn't want the Crystal Ponies to experience the same soul-crushing disappointment she felt as a filly when Cloudsdale was passed over for hosting the games. But some last-minute problems arise: Cadance's hairstylist has called in sick and won't be able to style the princess's mane into the impossibly elaborate Royal Ceremonial Headdress, which is customary for greeting important guests; even worse, Ms. Harshwhinny will be arriving in fifteen minutes!

Rarity offers to work on Cadance's headdress at the spa by herself while the others rush to the train station to greet the inspector, who they can only identify by the flower-print luggage she carries. Rainbow Dash reminds her friends that Ms. Harshwhinny is notorious for putting ponies through the wringer, so they should roll with anything she may throw at them. The five find a cheerful mare boarding off the train with a flower-print bag, who they rush to welcome as warmly as possible. This clearly must be Ms. Harshwhinny, trying to catch them off-guard with her chipper attitude! ...Or so they think as they walk away from the station, leaving a strait-laced mare with her own flower-print bag all alone and looking pretty annoyed...

After giving a spectacular introductory dance routine for "Ms. Harshwhinny", Twilight checks to see if Princess Cadance is ready to meet the "inspector". Rarity is having her own problems trying to nail down Cadance's headdress, though, so the others try to buy time by giving the "inspector" the grand tour of the Crystal Castle—or at least the best one they can give, seeing they know their way around the castle as well as their guest, who turns out to be pretty claustrophobic. Twilight goes to see if Shining Armor can help, but this doesn't seem to do much good, since the "inspector" gets so pent up from being in the castle for so long that she bursts outside and has a good charge through the empire. After finally calming down and getting to meet Prince Shining Armor, the "inspector" compliments everypony for giving an ordinary tourist like herself such a wonderful time. Suddenly it dawns on everypony: they've got the wrong pony!

The five desperately search for the real Ms. Harshwhinny, only to find her in the very last place they want her to be: the spa where Rarity is working on Cadance's headdress! Rainbow Dash thinks she's blown the empire's chances and guiltily admits their folly to the princess. Fortunately, all is not lost: Rarity has perfected Cadance's mane in time, and the tourist, who's also there, has just told Ms. Harshwhinny about the most wonderful (albeit unintended) reception she's ever had, which also turns out to be the most sincere appraisal in the history of the Equestria Games. Ms. Harshwhinny is impressed, meaning Cadance gets to proudly announce that the Crystal Empire will be hosting the Equestria Games! The six friends return home, eager to return for when the Equestria Games begin—as well as to see how well Spike's been looking after their pets while they were away, unaware that the sidekicks are all hiding in their train car...