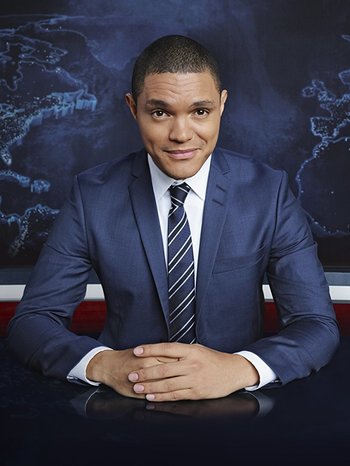 Trevor Noah (born 20 February 1984) is a South African comedian, best known to an American audience for hosting The Daily Show with Trevor Noah following the departure of Jon Stewart. He was — as the title of his autobiography implies — "born a crime" in South Africa, the result of a then illegal relationship between a white Swiss man and a black Xhosa South African woman.

His comedy circuit attracted attention for its genuinely international and cosmopolitan approach to humour, as Trevor Noah brings a genuinely post-colonial and critical view of international politics, both of his native South Africa, other nations, and of the USA. Helped by the fact that he speaks many languages, including English, Xhosa, German and others.

Trevor Noah's works include examples of the following tropes: