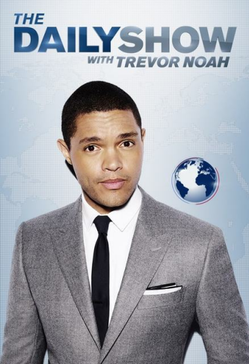 Continuing the war on bullshit.
"I can only assume that this is as strange for you as it is for me. Jon Stewart was more than just a late-night host, he was often our voice, our refuge, and in many ways, our political dad. And it's weird, because Dad has left. And now it feels like the family has a new step-dad — and he's black, which is not ideal."
— Trevor Noah
Advertisement:

The 2015 revamp of The Daily Show following Jon Stewart's departure, featuring South African-born comedian Trevor Noah. In February 2015, Jon Stewart announced that he would retire, although the Daily Show will go on. In March 2015, Comedy Central announced that Trevor Noah would succeed him as host. Jon's last episode as host aired August 6, 2015, and Trevor's first show as host aired September 28, 2015.

At the age of 31, Noah became the youngest late-night talk show host currently on American television.

The Daily Show with Trevor Noah Contains Examples of:

Example of:
The Board Game