Spoiled by the Format 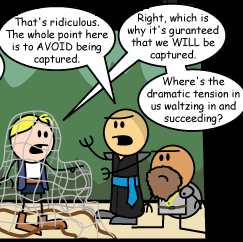 The annoying thing is that he's right.
"The anxiety ... can hardly extend, I fear, to the bosom of my readers, who will see in the tell-tale compression of the pages before them, that we are all hastening together to perfect felicity."
— Northanger Abbey

It's a universal but occasionally unfortunate fact that any medium has some physical realization; often, facts about that physicality can allow you to figure out things about a work earlier than the creators intend.

For example, when reading a book, you can tell exactly how much of it there is remaining. If you're near the end, you might realize that the end must come in a certain specific way as any other way would take too long to resolve. (Ending on a cliffhanger is one way to avoid this.) If you're not, you might know that the apparent resolution can't possibly last as there's too much book left. (An afterword, "Preview of the Next Book," or "Q&A with the Author" feature can help avoid that.) E-readers avert both of these problems, though some of them (such as the Kindle and Nook) have either the chapters and page numbers listed (as a normal book would) or a percentage progress bar (some Kindle versions).

Books also spoil through their page format, because a heavy reader tends to be able to read quickly enough that if they are concerned about, say, a character as they read down the left page their eyes can sometimes dart over to the right page to see what is being mentioned there. Some readers try to beat this phenomenon by placing a thick sheet of paper over the right page as they read a book for the first time, and are nearing the end of the book.

A similar phenomenon can happen for TV broadcasts due to their generally fixed length. For example, in a Dramatic Hour Long episode, any solution to a problem that comes after 20 minutes will generally fail, while any solution that takes 35 minutes will generally succeed. Even if your time sense is poor, you can often figure out whether the currently proposed solution is the correct one by counting commercial breaks. Similarly, mystery shows have a tendency to introduce the villain somewhere around the 15 minute mark: soon enough that they feel like an integral part of the episode, but late enough that they're not the first person you associate with the setup. Contractual Immortality and related tropes are another example of this in TV series: there is a clear delineation between "regular characters" and everyone else, which often spoils the suspense of whether any given character will die, get married, be promoted, etc.—or else reveals a culprit's identity before the characters guess it because there's only one guest character left that it could be.

Streaming video from the web removes the fixed-length problem, but virtually every video streaming service displays how far into the video you are as a matter of convenience. The bar disappears with inactivity, but it takes just a move of the mouse (accidental or on purpose) to make it appear again. Some videos may have a blank screen for the last part to obfuscate the video's length, but there's not much of a way to make a video go longer than it appears.

A short-term variant of this can occur when watching TV shows and movies with Closed Captioning or subtitles, since they usually display a sentence before it's finished being said. This means that if a character's words are cut off in the middle of a sentence, you know that they're going to be interrupted by something a few seconds before it happens. In some cases, when it's obvious enough what the character is going to say next, it's possible to avoid this in subtitles by showing the whole sentence anyway, then making it quickly disappear when the character is interrupted. Some captioning includes the name of the person doing the speaking, which is especially frustrating if that person's actual identity is an important future plot point and hasn't actually been revealed yet.

Another variant of this is when the phrase "Part 1" is in the title — you know that it must end on a cliffhanger of some kind.

This can be a good thing depending on the work and the viewer's preference. Some works may even take advantage of this trope, using the viewer's awareness to either avoid explaining the obvious or even to play with their expectations.

Compare Disc-One Final Dungeon and Interface Spoiler, which are much the same issue applied to video games, and Conspicuously Light Patch, which is this trope in animation.

Contrast Your Princess Is in Another Castle!