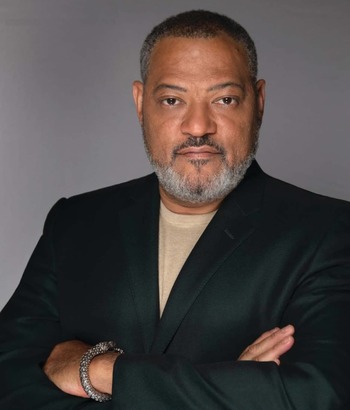 "What is real? How do you define real? If you're talking about what you can feel, what you can smell, what you can taste and see, then real is simply electrical signals interpreted by your brain."
—Morpheus, The Matrix
Advertisement:

Laurence John Fishburne III (born July 30, 1961) is an American actor, producer, screenwriter, and film director, and a quiet man. Maybe too quiet. Sometimes to the point of being almost inaudible.

For most of his early career, he was credited as Larry Fishburne. One of his early roles was Cowboy Curtis on Pee-wee's Playhouse, as well as having a role in Apocalypse Now, the latter of which he got by lying about his age during auditioning, claiming that he was 17, rather than his real age of 14. By the end of Apocalypse Now's infamously Troubled Production, he was an actual 17 year old with a nasty heroin addiction (this is what happens when you work with Dennis Hopper in The '70s).

He is perhaps best known for his role as Morpheus in The Matrix trilogy, and for his portrayal of singer musician Ike Turner in the Tina Turner biopic What's Love Got to Do with It?. Pity that women gave him the evil eye for years because of the last one.

His noteworthy voice landed him the role of narrator in TMNT (2007), as well as the voice of the Silver Surfer in the second Fantastic Four (2005) movie.

Has been cast as criminologist Dr. Raymond Langston on CSI and has landed the role of Perry White in the 2013 Superman movie Man of Steel. As of April 2014, is a regular on both Hannibal, playing Jack Crawford, and a main cast member on black•ish, where he plays Pops.