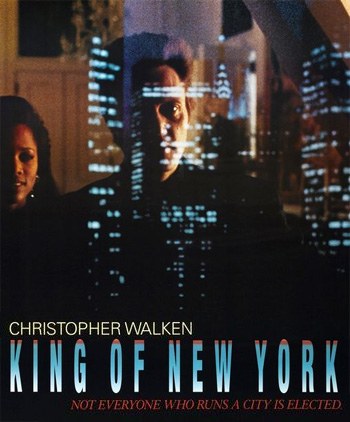 Roy Bishop: "Did you really think you were going to get away with killing all these people?"
Frank White: "I spent half my life in prison. I never got away with anything. And I never killed anybody who didn't deserve it."
Advertisement:

A 1990 gangster film, directed by the legendary Abel Ferrara. The film stars Christopher Walken, Laurence "Larry" Fishburne, Victor Argo, and Giancarlo Esposito and features (in the first major screen roles for each) David Caruso and Wesley Snipes. Though initially panned by critics for its enthusiastic use of violent and sexual images and its "glorification" of criminal activity, the film carved out a niche audience among fans of gangster movies and rap, and is today considered a classic example of 1990s crime cinema.

The story concerns Frank White (Walken), a powerful drug lord who is released from prison after serving a lengthy stretch, and reunited with his old gang, led by streetwise goon Jimmy Jump (Fishburne). Frank claims to have reformed and hobnobs with the cream of New York society to prove it, but continues to engage in his criminal pursuits. He has a dream: to unite the whole New York underworld in one multi-racial organization, with himself at the head, and use some of the profits to build hospitals for the poor and the needy. But there are a few roadblocks, like racist Mafia boss Arty Clay (Frank Gio) and greedy Triad gangster Larry Wong (Joey Chin), who will need to be cleared away first.

Meanwhile, the cops, led by the low-key Roy Bishop (Argo), do their best to bring Frank back in on any charge that will stick, but are stymied at every turn by his fleet of high-priced lawyers. Finally, two of Bishop's subordinates, Dennis Gilley (Caruso) and Thomas Flanigan (Snipes), decide to take the law into their own hands, and get Frank by any means necessary...