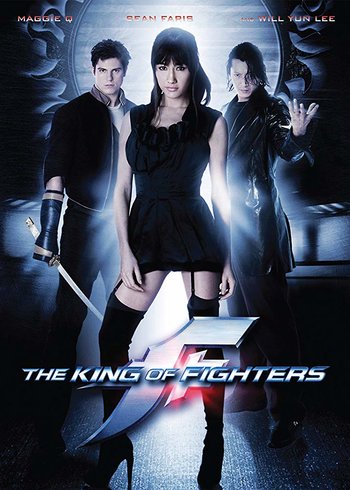 The King of Fighters is a 2010 American sci-fi/martial arts film based on the fighting game series of the same. Directed by Gordon Chan, it stars Sean Faris, Maggie Q, Will Yun Lee and Ray Park.

Rugal (Park) steals three relics from a museum: The Kagura Mirror, the Yagami Necklace and the Kusanagi Sword. He uses them to disappear into a dimensional portal to awaken a mythical entity known as the Orochi, which grants limitless powers. However, the sword is revealed to be a fake and the quest is delayed, so Rugal decides to use the King of Fighters tournament, which is held in an alternate dimension, for his benefit. The real sword is with the Kusanagi family, and it's up to Kyo Kusanagi (Faris), Mai Shiranui (Maggie Q), and her boyfriend Iori Yagami (Lee) to stop Rugal.

Alternative Title(s): The King Of Fighters