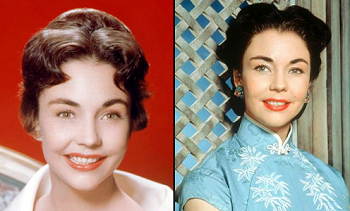 Caucasian Jennifer Jones (left) as Eurasian Han Suyin (right)
When a character who is supposed to be of mixed ancestry is played by an actor who obviously is not. This is not to say that people of mixed parentage do not physically resemble one race over another—they often do. This trope describes the flagrant instances of laziness and inattention in casting, which result in an attempt to force the viewer to accept that a character is the biological child of a character of another race, even though their phenotype clearly precludes that from being a real possibility.
Advertisement:

This is due in large part to the lack of mixed-race actors in the American television/film industries—although one should point out that this is largely due to the biases of the industry itself, which has a tendency to shy away from performers who aren't readily identifiable as members of a particular race/ethnicity.

Often occurs where the parentage of the character is a defining issue of the plot. This is not uncommon in American dramatic shows, where it most often involves the children of black/white mixed marriages. Chalk this one up to the rigid and brutal history of the American color line—scriptwriters still use the twist of an ostensibly "white" character being fathered by a black man (or vice versa) to jolt the audience by invoking longstanding taboos against cross-racial romance. Therefore, one could say that the imperatives of plot justify this trope to a limited extent. However, in the majority of cases, it comes across as utterly implausible. More often than not, the writer simply leans upon viewer ignorance—as if the relatively small number of biracial Americans makes it possible to accept that a character is biracial simply because the plot decrees it. Adding to the insult against viewer intelligence is clumsy writing, which often causes the parentage revelation to be completely disconnected from the preceding plot. It is often a ham-handed attempt to up the dramatic ante, without rhyme, reason, or foreshadowing. In other words, it is a cheap source of foundation-shaking conflict that can be invoked without regard for the narrative's internal logic.

A variant is often used in a comedic contexts, such as animation or sitcoms. A character will discover obscure roots in another ethnic group, usually by way of a distant ancestor. The character will often proceed to redefine their whole identity in a ludicrously exaggerated manner based on this information, regardless of the fact that the person lacks any substantive cultural or physical resemblance to the group in question. This plotline's persistence can perhaps be explained by its versatility as a vehicle for dissecting and/or subverting ethnic stereotypes and assumptions.

In real life, mixed-race individuals can be anywhere along the range of colors of any of the races in their makeup, up to and including the lightest and darkest extremes of skin and hair color (though this is rare). This nonetheless attracts criticism because Reality Is Unrealistic.