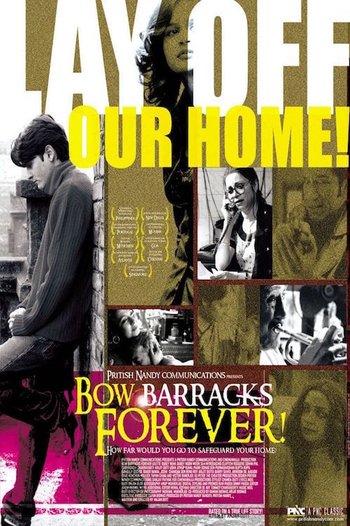 Bow Barracks Forever is an Indian English-language film produced and directed by Bengali filmmaker Anjan Dutt. Set in Kolkata, the movie chronicles the lives, struggles and eventual triumph of an Anglo-Indian community living in the titular Bow Barracks apartment complex. The movie chronicles the lives of the residents as they face the usual set of life’s tribulations, as well as pressure from a sleazy real estate developer who is trying to force them off property they’ve owned for decades.

Emily is a widowed mother, living with her son Bradley and pining to join her older son Kenny in London. Unfortunately, that older son seems to have forgotten completely about her, or cut her out of his life. Her younger son Bradley is a listless guitar player who can’t seem to hold down a steady job, and is having an affair with Annie, a battered wife.

Annie is a battered woman living with her husband Tom, an Armenian origin alcoholic wife beating thug who is involved in some kind of shady scheme. She finds solace in the arms of Bradley.

Melvin and Rosa are an older couple, with a teenage daughter Sally. Melvin is a hardworking teacher, but Rosa feels unappreciated and is cheating on him. Their daughter Sally pines after Bradley, but he isn’t reciprocating.

And finally, there is Peter “the cheater”, a well meaning small time hustler. Who might just end up being the man to save the day.