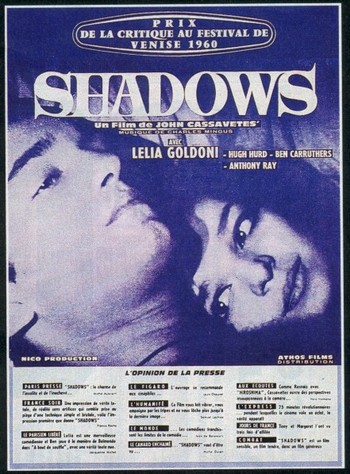 Shadows is a 1959 film by John Cassavetes.

It revolves around a tight circle of friends and acquaintances in the New York City jazz scene, and specifically around three siblings. Ben is a light-skinned black trumpet player who spends not enough time working as a trumpeter and too much time cruising around Manhattan with his white buddies looking for girls. His similarly light-skinned sister Lelia (played by Lelia Goldoni, who was actually Sicilian) meets Tony, a white hipster, at a party. They fall in love. The third sibling, significantly more darker-skinned Hugh, is trying to make it as a jazz singer, but is struggling to get work outside of sleazy low-rent nightclubs. The three stories of the three siblings sometimes proceed separately, and sometimes intersect, playing out against the background of hip New York beatniks.

Shadows was a no-budget production filmed by Cassavetes, at that time an acting coach and television actor, without permits on a 16mm borrowed camera. It launched Cassavetes' career as an acclaimed director of art-house cinema, and has since come to be regarded as a landmark of American independent film. Also of notice is this being his fellow collaborator Seymour Cassel's debut.