Film / Shadow of the Vampire 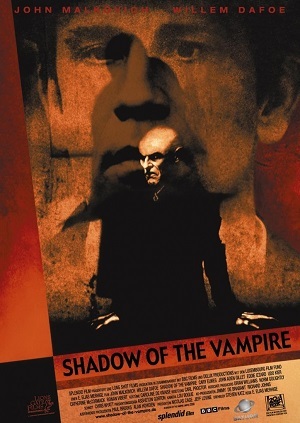 F. W. Murnau: I! Will! Finish! My picture!
Max Schreck: This is hardly your picture any longer!
Advertisement:

Shadow of the Vampire is a 2000 film directed by E. Elias Merhige, starring John Malkovich and Willem Dafoe.

Malkovich plays F. W. Murnau, the German director who sets out to make his most identifiable film, Nosferatu: Eine Symphonie des Grauens, in 1922. To make his somewhat lawyer-friendly take on Dracula, he hires the mysterious Max Schreck to play the vampire Count Orlock. Murnau knows that Schreck is a real-life vampire, and he's hired the actor to ensure a real-life performance. But, he's really bitten off more than he can chew this time...

Dafoe earned an Academy Award nomination for his role.